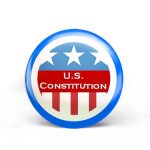 Preschool:  Do three requirements including the two starred.

_____ 1 *  Learn the three branches of government and the roles of each. (Note: At the Preschool Level, kids should understand the basic concepts of rules and who is in charge, but are not required to remember the vocabulary.  Level 1 and above should know the names of all three branches and what they do).  Know the names of the President and Vice President and be able to recognize them.

_____ 2.*  Learn the 3 freedoms guaranteed in the constitution.  (Note: Higher levels should be able to tell you what these are, but Preschoolers should simply learn the ideas of what these mean).

Level 1:  Do four requirements including the two starred.

Level 2:  Do five requirements including the two starred.

_____ 2.*  Be able to explain what the constitution is and all its parts. What is an “amendment” and how many are there?  What are they for? What is the Bill of Rights?

Level 3:  Do six requirements including the two starred.

_____ 2.*  Pick a current event or issue and explain why you think it is, or is not, constitutional.  For example, we are guaranteed freedom of speech in the first amendment, but does that mean you should be allowed to yell, “Fire!” in the middle of a movie theater?  We are guaranteed freedom of religion without the government telling us what we should believe.  Does this mean people should not be allowed to pray at school?

Level 4:  Do seven requirements including the two starred.

_____ 2.*  How many Supreme Court Justices are there? Who are they and how do they normally rule?

Level 5:  Do nine requirements including the two starred:

_____ 2. *  Teach someone how to do a skill from this badge or teach some knowledge about this badge to someone. You can teach kids, your spouse, seniors, anyone, just as long as you are sharing your new found knowledge. If for some reason you cannot teach what you have learned to someone else, you may choose an additional 2 optional requirements instead.

_____ 4.  Find out who wrote the constitution and when.  How did they do it?  What process did it have to go through before it was accepted?

_____ 6.  Design a poster or craft project showing how you have benefited from the freedoms embodied in the U.S. Constitution.

_____ 7.  Create a timeline from the founding of the constitution to the present of every change or addition that has been made.

_____ 8.  If you could add an amendment to the constitution, what would it be?  How would you word it to make sure that others do not interpret your amendment differently than you intended it?  Why do you think this amendment is important enough to make into law for all Americans?

_____ 9.  Create a poster or booklet to teach others about the constitution.

_____ 10.  Participate in a community service project that has something to do with the constitution.

_____ 11.  Research a career that has something to do with the constitution.  Examples might include politicians, judges, lawyers, lobbyists, law enforcement, or even
journalists.  How does knowledge of the constitution effect their job?

_____ 13.  Rewrite the Bill of Rights in your own words.  What do each of these amendments mean to you? How do you interpret them?

_____ 15.  Know what the Bill of Rights is and what rights it guarantees the American people.

Our web pages may provide recommendations and/or links to other digital and/or non-digital resources for the convenience of users. Curiosity Untamed LLC is not responsible for the availability or content of these external sources, nor does Curiosity Untamed LLC endorse, warrant, or guarantee the products, services, or information described or offered at these other digital and/or non-digital resources. Use these resources at your own risk and with a parent’s permission.