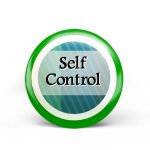 Make a list of ten ways you can exhibit these characteristics in your daily life.

_____ 2.* Discuss the following questions with a parent or other adult.

_____ 3. Have you ever heard the expression, “Sticks and stones can break my bones, but words will never hurt me?” The truth is, words can hurt; sometimes even more than physical pain. Learning to control what you say and how you say it is just as important as controlling your actions.

_____ 4. Bullying has become a huge problem in many schools and communities and especially online. Bullying can be classified as any ongoing physical or verbal mistreatment. Bullies show no self control. Look for examples of bullying in your books and TV shows.  Have you ever bullied someone?  Discuss with a parent or other adult what to do if you are ever bullied by someone else or see someone else being bullied.

_____ 5. Write an essay about self control, why it is important, and how you plan to implement it in your life.

_____ 6. Do silly exercises to strengthen your self-control like not scratching, not blinking, or sitting extremely still for a long period of time. How difficult was it? Is it easier if you set a time limit and know that you have a deadline?

_____ 7. Have you ever noticed that many people do things they know are wrong simply because others around them are doing it? Self control is much easier when the friends you choose to associate with are those that will hold you accountable to proper behavior. Think about the friends that you have. Do they challenge you to be the best you can be and love you unconditionally? Or do they encourage you to behave in a way that you know is wrong, but you are afraid of their disapproval? Self control means standing up for yourself and for what you know is right, even it means that your friends might not like it. The next time your friends want you to do or say something that you know you shouldn’t, stand firm and refuse. Think long and hard about the type of friends that they are and decide if they are truly worth having.

_____ 8. Anger can serve as a signal that something is wrong, and the best way to control anger is to find what caused you to feel angry in the first place and resolve it. If you continue to justify your anger, or blame it on others, you will not be able to overcome it. When you are angry, practice taking time to count to ten and take a deep breath before you say or do anything. Do not slam things or throw them, and think before you speak. Remember how insults and mean actions affect you and make sure that you avoid causing others the same pain. In many cases, the problem that caused your anger may have something to do with your own actions. Be honest with yourself about your role in the problem and find ways to change how you behave in the future. If you are at fault, ask forgiveness of those you have offended. If others are at fault, try to understand where they are coming from and be tolerant of their position.

Every time something makes you angry, take the time to calm down enough to take control of your response before you speak or act.

_____ 9. Many things in life are not inherently bad, but can become so if done to excess. For example, we all need food to survive, but overeating can lead to obesity. Over sleeping, over working, and over spending are all examples of good things gone bad by losing self control.

_____ 10. Procrastination is something that everyone fights from time to time. Whether it is chores, homework, or some other task that you do not wish to do, putting it off will only provide more stress later on. Having the self control to do unwanted tasks quickly will actually make your life easier and more enjoyable. For the next week, make an effort to complete all necessary tasks as quickly as possible. Take note of how much free time you end up with and how much more relaxing it is without undone chores hanging over your head.

_____ 11. Write or tell a chain story about a make-believe prince or princess who has no self-discipline.

_____ 12. Interview people with careers that require self control such as doctors, scientists, and engineers. How does self control help their work?