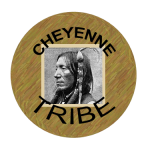 This badge can be earned multiple times for any specific native American tribe or group such as the Eskimos, Cherokee, Apache, Blackfeet, Ute, Ottawa, Inuit, Delaware, Seminole, Hopi, or Creek.

Penguin:  Do three requirements including the two starred and one optional.

_____ 1.*   Discuss what it means to a “Native American”.  How does it differ from being an immigrant?  Choose a specific tribe to learn more about.  Where did this tribe originate?  Locate the area on a map.  Find where you live on the same map.  Are they near or far?

_____ 2.*  What is the traditional dress of the native Americans in your tribe? Items might include moccasins, Tribal clothing, regalia clothing, boots, parkas, dresses, or shawls.  Look at pictures of these items or at real items if possible.

Otter:  Do four requirements including the two starred and two optional.

_____ 2.*  Find out what type of homes your native Americans lived in such as teepees, wigwams, longhouses, or caves.  Draw a picture of a typical home or make a 3D model of one.

Dolphin:  Do five requirements including the two starred and three optional.

_____ 2.*  Learn about the different jobs that women, men, and children had in their daily life. How does this differ from your own life?

Butterfly:  Do six requirements including the two starred and four optional.

_____ 2.*  Learn the history of this tribe in America from the colonist’s first contact with them to the present day.  What was their relationship to the colonists?  How were they treated?  How have their lives changed?

Eagle:  Do seven requirements including the two starred and five optional.

_____ 2.*  Find out what government agencies and other associations currently help Native Americans.  What compensations do they receive for the atrocities committed against them during the colonization of the U.S. ?

_____ 3.  What foods did/does your tribe eat?  Try an authentic food or recipe from your chosen tribe.

_____ 5.  Learn about the crafts of your chosen tribe.  Tribes created art out of the resources near them.   Find out what these resources were.  What patterns or art type were they known for?  Were they weavers?  Potters?  Create a craft that represents the crafts made by your tribe.

_____ 6.   Listen to some Native American music.  What instruments are used?  If possible, play an authentic instrument, or try to make a simple version of your own such as a drum or rattle.

_____ 8.  Make a craft or participate in an activity that represents native American culture.  Examples might include learning a Native American dance, making walking sticks, making seed necklaces, pinch pots, weaving,  or body painting. (This requirement may be repeated.)

_____ 9.  Learn what a totem pole is and what the figures represent.  Make your own totem pole or draw a picture of one that represents your family.

_____ 11.  Visit or view an authentic Native American reservation, Pow Wow, or other event.

_____ 13.  Participate in a community service project that benefits Native Americans in some way.