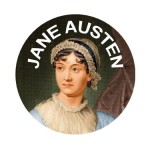 Jane Austen’s books were not intended for young children. While there is little in them that is offensive compared with current societal standards, there are a lot of adult concepts and concerns.

Preschool: choose three requirements including the one starred.

_____*1. Find out who Jane Austen was, where she lived and when.  What did she become famous for doing?

_____*1. Do Preschool requirement 1.  Read, or have read to you, one of Jane Austen’s books. A well-written condensation (abridged version) is OK.

_____ *2. Read a biography of Jane Austen. This can be a short one such as an encyclopedia or Wikipedia entry.

OR read a chapter in a history book about that time period in British history OR read a book by another author from the same time period.

_____*1. Do Level 3 requirements 1 & 2. Watch a second movie or attend a second dramatic reading or play of any of Jane Austen's stories.

_____ *2.Find at least 10 other female authors of Jane Austen's time period.  What type of books did they write?  Why was it frowned upon for women to write books at this time?

Level 5:  Do 9 requirements including the two starred.

_____ 2. *  Teach someone how to do a skill from this badge or teach some knowledge about this badge to someone.   You can teach kids, your spouse, seniors, anyone, just as long as you are sharing your new found knowledge.   If for some reason you cannot teach what you have learned to someone else, you may choose an additional 2 optional requirements instead.

_____ 3. Dry some herbs and use them in cooking, potpourri, or dried floral arrangements.

_____ 4. Earn the Flower Arranging Badge or make two bouquets, one from wildflowers and one from cultivated flowers.

_____ 5. Learn some traditional table or parlor games such as chess or charades.

_____ 6. Learn to curtsey and make formal introductions. Learn how to set a formal table and practice being a servant for your family for one meal.

_____ 7. Learn to line dance and participate in a line dance at a party or other function.

_____ 9. Earn the Stitchery Badge or learn to embroider and monogram something.

_____ 10. Care for some chickens for at least one day. This needs to include gathering eggs. What protection from predators do these chickens have compared with chickens in Austen’s day?

_____ 11. Learn to play some traditional garden games such as croquet, lawn bowling or horseshoes.

_____ 12. Locate some songs mentioned in an Austen book or played in one of the movies.  Learn to sing or play one of them.

_____ 14. Ride in a stagecoach or similar horse-drawn vehicle for at least half an hour (to increase your appreciation for modern springs and air-filled tires).

_____ 16. Earn the Calligraphy badge or practice elegant writing until you can send a fancy invitation.

_____ 18. Earn the Sport Badge in Fencing or learn to fence well enough that you can participate in three matches.

_____ 19. Draw someone’s silhouette and pose while someone draws yours.

_____ 21. Harvest some reeds, vines, or tulles and weave them into a basket or other useable article.

_____ 23. Design and sew a period costume for a Jane Austen character.

_____ 24. If you have previously ridden horses and you have permission from the adult in charge, try riding a horse side-saddle.

_____ 25. Attend a day-long conference, or minimum of two meetings of a society or book club featuring Jane Austen or her books.

_____ 27.  What were traditional occupations for women in Jane Austen’s day?  Many women sewed, knitted, embroidered, painted, crocheted etc.  A well accomplished young lady was expected to shine in many areas: music, art, hand-work.  Choose one of the skills and make an item.

_____ 28.  Learn about daily life in Regency England.  What was the Regency?  What important events happened during that period?  What was life like for the Upper, Middle and Lower classes?  A good resource is One Day in Regency England by Alistair Scott (published by Robert Tyndall Ltd, 1974, ISBN 85949 031 9).

_____ 29.  Read one of Jane Austen's novels and then watch two different movies based upon that book.  Which one did you like best?  Why?  Do you feel movie-makers take too much license with the story or were they accurate to the text?  Did the omissions/alterations improve or detract from the story?

_____ 30.  Learn about one of the towns or cities that Jane Austen mentions in her books eg; London, Bath, Portsmouth.  What was the town/city like during her lifetime?

_____ 32.  Learn about the art of Jane Austen's period.  Which British artists were active at this time?

Austentatious Crochet: 36 Contemporary Designs from the World of Jane Austen by Melissa Horozewski