Foods Around the World 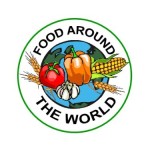 (Discover the World)
By Kerry Cordy

Penguin:  Do three requirements including the two starred and one optional.

Otter:  Do four requirements including the two starred and two optional.

Dolphin:  Do five requirements including the two starred and three optional.

_____ 2.*  Choose 5 countries and find out what foods are grown there.  Locate these countries on a map.

Butterfly:  Do six requirements including the two starred and four optional.

Eagle:  Do seven requirements including the two starred and five optional.

_____ 2.*  Learn about foods that are specific to various world holidays or religions.  Examples might include:

_____ 3.  Learn about at least 3 countries that eat insects.  What type do they eat?  How are they usually
prepared?

_____ 4.  Learn about some of the culture in the countries you have tried food from.

_____ 5.  Visit an ethnic restaurant and eat an entire meal (at least three courses).

_____ 6.  Tour an ethnic restaurant or interview to an ethnic chef.

_____ 9.  Learn about at least 10 different cooking or eating tools and utensils used around the world.
Examples might include:

_____ 11.  Learn about careers that involve food from around the world.  Examples might include a chef,
food critic, produce wholesaler, farmer, freight forwarder, etc.

_____ 12.  Find out how foods are shipped to other countries.  How do they keep them fresh?  What forms
of transportation do they use?

_____ 13.  Look through cookbooks from at least 5 different countries.  How does the food differ?

_____ 16.  Participate in a community service project that has something to do with food around the world.
One idea is to sponsor a “Who’s Hungry?” night to teach your community about the lack of food around the
world.

This is a general summation of the hungry people in the world and how many actually have enough to eat.
Get the statistics for your local community and combine your evening with a food drive for a local food bank.

_____ 17.  Find out what the average family spends on food each year in at least 5 different countries.  How
does America compare?

Websites:  These websites are not associated with our program and we cannot guarantee their
content.  Please do not surf the internet without your parent’s permission.

Recipes from Around the World.
http://www.bbcgoodfood.com/content/recipes/cuisines/

Food Around the World
http://www.factmonster.com/science/food/around-world.html